Journey Into the Amazing World of The Tiger Shadow 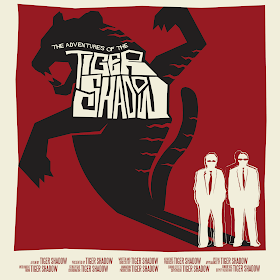 Nearing the end of the last millennium while the east and west coasts
cultivated their respective pantheons of rap royalty, the musical
movement overseas was developing a very distinct take on the whole
genre. At the time, nothing held more creative promise than flowing over
an off kilter sample and banging drums.

Incredible bands like Massive Attack, Tricky and Portishead released
awe inspiring records with a much deeper, emotive quality. These
powerful songs leaked out of every back alley pub and hipster cocktail
party from London to San Jose. Then like Keyser Soze... the strength
of both movements seemed to disappear in the night.
Ten years later out of nowhere a group is now continuing this lineage
and pushing on in search of greater meaning and dynamic sound. Mix the
aforementioned bands with 2 parts dub step, a spooky pinch of The
Specials and one incredibly pensive MC and, Voila!... Tiger Shadow.

"If you're feeling this, rewind this" boasts West African MC Komla, and
we couldn't agree more. If you are a fan of true hip hop in its most
distilled essence, their new album The Adventures of the Tiger Shadow
should fill the musical void that was left ten years ago. It is a true
artistic statement in the sense of it's cinematic arch and its wonderful
ability to energize your mind, body and soul.
"Serene Trampoline" is a great little summertime track. One can't help
but bop along with the poppy bass line and Motown harmonies. "Abject
Happiness" is another standout with it's sensual 3rd world melody and
gritty rhymes, but the real gem here is "What Were They Thinking". Every
phrase is heavy handed with eloquently delivered raw wisdom, going
against every current rap trend by speaking about the over-sexualization
of our youth. The term 'conscious rap' doesn't even begin to describe
the goings on here. "The audience cant keep eating the same food. Too
much of one thing is not good" Komla explains in his hypnotic delivery.
He goes on to apologize for party pooping, but it is all to apparent
that if you are not 'vibing' the seriousness of the music... you are at
the wrong party.
With such a potent mix of lyrical content, beats, and bass - you would
be hard pressed to find another groups music that would fit in at both
the darkest, grittiest underground party as well as an elegant,
high-class soiree - and seem equally at home.